For 25 years, generous individuals like you have gathered and strengthened our community by supporting the Seattle Jewish Film Festival, nurturing it from a 100-seat upstart weekend series in 1995 to a 13-day, five-venue, three-city, regional attraction.

This year, SJFF celebrates a major milestone: its 25th Silver Screen Anniversary. In that quarter-century, SJFF has screened over 600 films depicting the global Jewish and Israeli experience and impacted more than 100,000 attendees.

Please join us by supporting this milestone year, and consider a 25% increase in sponsorship amount to commemorate a quarter-century as the largest Jewish event in the Pacific Northwest.

Donate online below; or make a pledge by phone or pay by check (made out to “SJCC”).

Business underwriting and in-kind donations are the lifeblood of our non-profit festival. Your sponsorship allows you to reach our sophisticated, dedicated, loyal, local audience. If you’re interested in in-kind donations of goods and services, please contact SJFF Director.

Non-profit organizations, faith institutions, government agencies, schools, clubs, and consulates can sponsor a film and showcase their mission and support of SJFF. Benefits include recognition, tabling, program development, tickets to your sponsored film, passes, and invitations to special events.

Mutual Outreach Benefits
All community partners have the opportunity to display promotional materials at their sponsored film, and will be recognized in print, on screen, and on the SJFF website alongside their sponsored film and on our sponsor logo page with links to your website.

Film sponsorship is limited to general admission films and brunch; opening night, closing night, and special events are excluded (with some exceptions).

Community partners can buy discounted group tickets to their sponsored film(s). This is a nice way to thank your hard-working staff members, volunteers, board members, and donors. 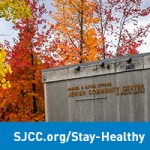 Governor Inslee announced new “Healthy Washington–Roadmap to Recovery” guidelines. Learn more on what it means to the J and get information and resources from WA Public Health at our Stay Healthy page. Thanks for doing your part to mitigate community spread! #CommunityNeverCloses